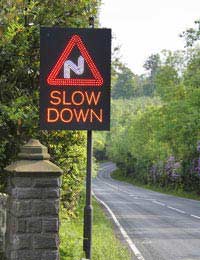 Is your car harbouring a government spy? Is your registration number in the hands of a fraudster who wants to break speed laws? To protect your in-car privacy you must act now. Here are the secrets the automotive industry doesn’t want you to know about…

The in-car ‘black box’ is a device which records details of your driving. Privacy experts are critical of the concept, which is already widely used in the USA. At the moment black boxes are only installed in British luxury cars, but the Department of Transport is in discussions to make them compulsory.

So what does the little black box actually do? Recording speed, position and steering angle, the box is designed to be used in the case of a crash. Advanced models can send a signal to the emergency services – using certain indicators to detect the likelihood of injury.

Although they’re effectively in-car ‘spies’, the black boxes will work in favour for the driver whose driving didn’t cause the accident. But if you’re breaking a speed limit or fail to brake in time, your box will testify against you. A box has already been used in court to prove that a driver wasn’t going as slowly as he claimed. With road accidents dramatically increasing over the last few years, the Department of Transport is understandably keen on anything that will reduce the casualties.

All well and good. But the Department is considering further uses for the box. It could effectively be used to monitor speeding cars – and even to issue automatic fines when you break the limit. Although the DoT admits the idea may encounter resistance from privacy groups, its intentions are perfectly legal. Gathering evidence from cars to penalise legal infringement falls on the right side of the Human Privacy Act.

Privacy groups are concerned about the wider potential for these boxes to invade our privacy. In the US, parents already use it to trace their errant teenage offspring. Will your car eventually report you for speeding or automatically charge you for entering congestion areas? What exactly is the black box recording – and how will manufacturers prevent it from falling into the wrong hands? The DoT must answer all of these questions before making its in-car spy compulsory in the UK.

What is Number-Plate Fraud?

This is a fraud technique that is little-known but terribly easy to pull off. A fraudster steals your registration number (or your physical number-plate) and attaches it to a different car. Why would they want to do that?

Hijacking registration numbers is increasingly common, particularly in the London area where parking is difficult and congestion charges are high. The AA estimates that up to 10,000 cars on the road today are fitted with cloned number-plates.

Under a false registration number, you can stop on double-yellows while you lunch in the pub… and drive home under the influence. All highly illegal, and a real shock for the real owner when they receive a sheaf of unpaid speeding and parking fines. Just ask the new BMW owner who received an insurance claim for an accident he’d supposedly caused – and he was asleep in his bed at the time…

If you have reason to be concerned about your in-car privacy, consider the following actions:
Next Page

The Employers Code of Practice

What Are Your Rights Regarding Email Privacy In The Workplace?