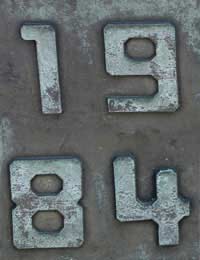 Adopting a false identity is an irresistible story – until it happens to you. If you’re interested in finding out more about privacy crime look up the following books and films in your local library…

In 1949 author George Orwell penned one of the most influential novels of all time. Dazzling in foresight and frightening in its predictions, 1984 is a book about a future society whose every move is watched, controlled, and governed by Big Brother. The novel focuses on Winston Smith, a clerk at the Ministry of Truth. Winston lives in a world where civilised society is watched (via interactive telescreens) by the unseen, unknown Big Brother. He drinks the state vodka, eats the state rations, and lives in a state flat. “On each landing, opposite the lift shaft, the poster with the enormous face gazed from the wall. It was one of those pictures that are so contrived that the eyes follow you about when you move. BIG BROTHER IS WATCHING YOU, the caption beneath it ran.”

Winston makes the mistake of entering into a relationship with a co-worker, and enjoying extramarital sex, which is forbidden in Big Brother’s dystopia. Making discreet excursions to the outerlands, inhabited by Proles, they drink forbidden coffee, sing forbidden songs and witness the simple life enjoyed by the uneducated masses. He and his co-worker are eventually, of course, arrested, with the inevitable conclusion... or is it?

Orwell’s dystopia was partly inspired by his own experiences working for the BBC (which was then governed by the Ministry of Information). His character’s work involves correcting and re-archiving newspapers containing information about state-executed criminals or past wars. Orwell saw the extraordinary power of the media and the way it influences people more than any politician could ever hope to do. 'Big Brother' harnessed this power to send his message to the masses.

Another of Orwell’s sources of inspiration was a Russian novel written in 1921. In We, Yevgeny Zamyatin described a world where people have numbers instead of names, walk in predesigned lines, sleep at allotted times, and regulate their relationships using a coupon system. The portrayal of a radically totalitarian state, in which people live without any personal privacy whatsoever, captured Orwell’s imagination. In fact, it captured the imagination of many authors all over the world, spawning a whole new genre - the dystopia novel – whose main conceit was the complete loss of basic human rights.

The juicy topics of identity theft and financial privacy have been turned into a number of Hollywood movies.

In Firewall Harrison Ford plays a top bank security expert whose wife and children are kidnapped by villains who want $100 from his bank’s vault. When Jack (Ford) arrives home from work one night, it becomes clear to viewers that he’s being watched – by miniature cameras, computer capture devices, and phone taps. The film illustrates just how identity criminals can gain an insight to every aspect of one person’s life, from their ordinary conversations to their online passwords. What are the film’s villains after? Virtual money – accessible by an expert on a computer. As they tell Jack, bank robberies are moving into cyberspace.

Leonardo di Caprio portrayed one of the most famous identity thieves of all time in Catch Me If You Can. In real life Frank Abagnale was a master fraudsman before the age of 21, impersonating a pilot, doctor and solicitor – and cashing the pay-cheques – leaving a lengthy paper-trail for the police. Tom Hanks plays the cop devoted to catching the charming Abagnale through years and years of false identities. In reality, the pair eventually became good friends, and Abagnale took a job consulting for the FBI. His autobiography and subsequent books, including “The Art of the Steal”, are must-reads for anyone interested in privacy crime.