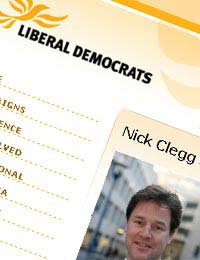 The Commission on Privacy is supported by some well established names, including shadow leader of the house David Heath MP, Simon Davies, director of Privacy International, and Shami Chakrabarti, director of Liberty.

Why Was the Commission Set Up?

When the task force was announced, David Heath said that he believed the government had been drifting from one IT related data crisis to another, and that at the same time they were assembling ever more information about the citizens of the UK. He said that the commission had been organised to attempt to take stock of what is happening to our privacy and personal information, protect our rights to personal privacy.

Liberal Democrat Leader Nick Clegg added that he felt that under the current government, the UK was suffering from “ the most sustained assault on personal privacy in history” and complained that other political parties were refusing to take any action to help stop what he saw as government snooping. He added:

“When it’s not thinking up new ways of snooping on the public, the Government has shown breathtaking carelessness with the data that has been entrusted to it.”

Who Are the Commissions Members?

The Commission’s members were announced in January 2009 and they are:The Commission’s ConcernsIn January 2009, the Information Commissioner ruled that the Home Office had breached data protection laws when it allowed a memory stick containing personal information relating to thousands of prisoners to be stored in an open drawer and then lost.

This was just one reason that the Commission was needed, according to Liberal Democrat Shadow Home Secretary, Chris Huhne. He didn’t think that the measures that the ICO had insisted on, namely an undertaking to be more careful, had gone far enough, and said:

"A formal undertaking to improve procedures is all very well, but disregard for our personal data continues to worsen.

"It only demonstrates that going ahead with the proposed ID card scheme will pose a real threat to the security of our personal data.

Ironically, considering their crusade against misuse of personal information, The Liberal Democrats were given an enforcement notice in 2008 after the party was found guilty of breaching strict privacy regulations. The Lib-Dems called 250,000 people in September 2008 and treated them to a pre-recorded message from leader Nick Clegg.

The Information Commissioner has banned them from using this canvassing technique again, after it received 50 complaints from people who had been on the receiving end of the calls, which were made to voters in 50 marginal constituencies.

Data Protection Act Privacy Notices: What Are They?
Share Your Story, Join the Discussion or Seek Advice..
@coljacko - I'm afraid this seems to be more of a problem with your own issues than your neighbours, who seem to be keeping within their boundaries, regardless of whether they have a trampoline and own a van. The issue also is living in a semi-detached house, I'm afraid is that you can't choose your neighbours and minor disputes when living so closely next to each other, comes with the territory, so to speak, even with those people who don't have health-problems such as yours. I don't think you have any legal rights here as there as your neighbours are theoretically not doing anything wrong and they noise from a child is only natural. I can only suggest that you have a polite and kind word with them to ask could they move the trampoline to another part of the garden, as from what you have said, they do seem willing to compromise. I do feel for you, as this type of neighbour is probably your worst nightmare, while they assume they are just living a normal family live which does include noise when you have a three-year-old. On another note, it might be worth you talking to your GP about these issues, as the last thing you want is it to spiral out of control, especially as you said you have a prediliction towards 'harm' (I don't know whether you mean yourself, or others). Your GP may be able to give you some guidance here. I hope this helps.
YourPrivacy - 14-May-15 @ 10:27 AM
Hi, can you help me please, I am a 56 male,living on my own in a semi detached, 3 bedroom house. I have many physical problems, and Mental health issues ie: Bi-Polar since 20yrs of age. I also have temporal lobe, damage. Due to all this I'm registered Disabled ( indefinitely ).Part of my condition manifests itself in a way that I have problems with the need to live a quiet and peaceful life. I have recently had new neighbours, a young couple with a 3yrs old daughter.When they moved in, we spoke to each other, and I explained my condition, and that I do not like heavy noise. I was assured that they would do their best, with having a2yr old daughter. Since they moved in, approximately 3/4 mths ago, I have had to take the action of, wearing head phones when watching TV, & ear plugs at other times. All this I have done because I do not wish to have a confrontation with them, as I have a tendency to over react, and have the capability to harm, which I am scared of occurring. I have 2 main problems that are pushing my buttons at the moment, 1) is the parking of a large colorful Auto windscreen van, feet away from my front room window, and inches from my deviding fence, this completely spoils my view, from any seating in my living room.2) Coming home evening of 11/5/2015, I was confronted by a 9 foot tall and approx 6/8 ft in circumference, trampoline, situated 2 ft from my 6 ft high privacy fence.This item is in full view of my bedroom window, being some 12 ft in distance. I did have a lovely view over adjoining fields, now ruined by the item. Completely adjacent to the The trampoline, and backing onto my decking area, that I use to sit out on in the sun, to help me relax, and settle my Mental health state. This as ruined my peace, and more so my Privacy, as when it's used, & being 3 feet taller than my fence, erected for my Privacy, the person jumping on it, peer's straight into my garden, ruining my peace and making me feel awkward, plus the noise affecting my mental health. Am I within my rights under 'Article 8 of the Human rights act 1998' my right to privacy and a peaceful life. I am worried that it is affecting my Mental state, and my sleep ( has my illness causes me to rest every day, during different times of the day). Do I have the right to request that they move the item, to the other side of the garden, where my view is not obscured, and my Privacy maintained. Your help would be appreciated.Thank you.Colin
coljacko - 12-May-15 @ 9:16 AM
Title:
(never shown)
Firstname:
(never shown)
Surname:
(never shown)
Email:
(never shown)
Nickname:
(shown)
Comment:
Validate: